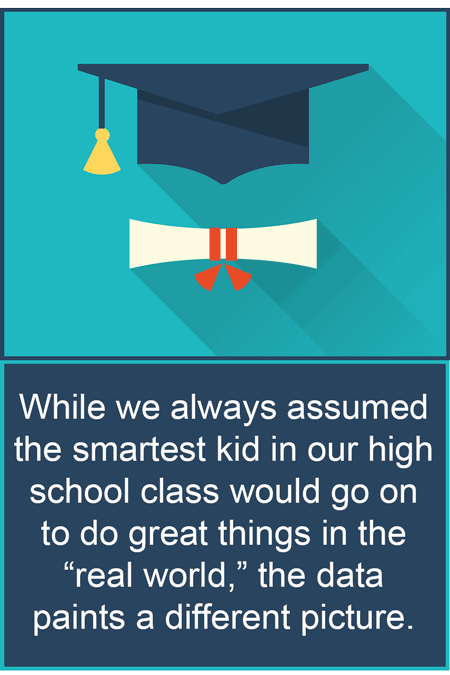 We all remember our high school valedictorian.

With their flawless GPA, ridiculous test scores, most likely to succeed award, and pretty much perfect everything, if anyone was going to conquer the "real world" — it would be them.

While we always assumed the smartest kid in our class was a "shoo-in" to become the next Jeff Bezos or Arianna Huffington, the data paints a different picture.

Karen Arnold, a Boston University researcher, tracked 81 high school valedictorians and salutatorians as they navigated post-graduation professional life. What did she find? 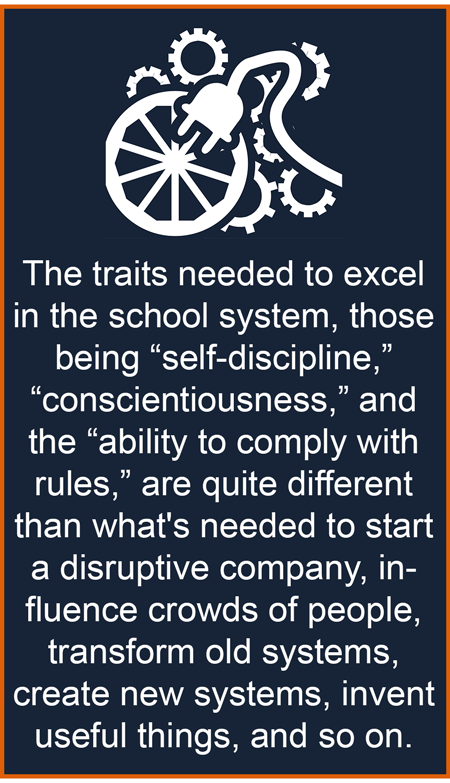 As you might expect, nearly all (95%) graduated college with a high GPA, 3.6 on average. The majority (60%) went on to earn a graduate degree, with close to half (40%) landing in "big diploma" professional careers (e.g. law, academia, medicine).

So no, they definitely weren't bums.

But how many of these high school whiz-kids went on to change the world, run the world, influence the world, or even to a lesser extent, make significant contributions within their own respective field(s)?

While these top high school performers went on to become reliable, consistent, and well-adjusted workers, none of them became a so called "top gun" or "household name" in their particular domain.

Lead author of the study, Karen Arnold, on the results "Valedictorians aren't likely to be the future's visionaries... they typically settle into the system instead of shaking it up." 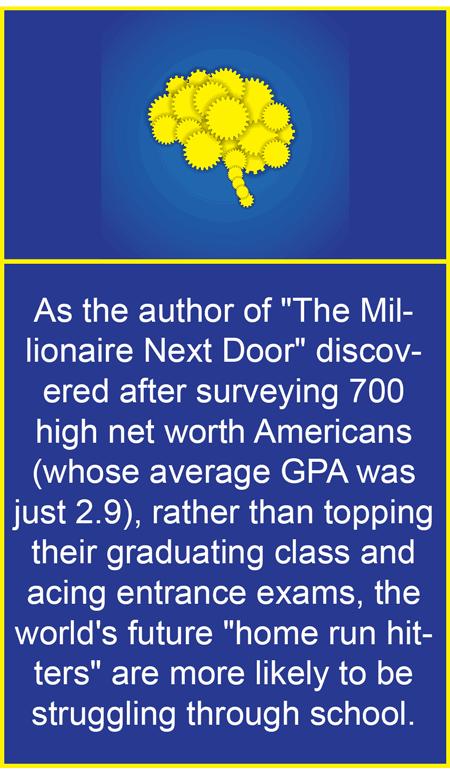 Why "School Smarts" Don't Matter So Much In The Real World

The traits needed to excel in high school, those being "self-discipline, conscientiousness, and the ability to comply with rules" according to Arnold, are quite different than what's needed to start a disruptive company, influence crowds of people, transform old systems, create new systems, invent useful things, and so on.

In fact, as the author of "The Millionaire Next Door" discovered after surveying 700 high net worth Americans (whose average GPA was a mere 2.9), rather than topping their graduating class and acing entrance exams, the world's future "home run hitters" are more likely to be struggling through school.

"I find NO substantial statistical correlation between the economic-productivity factors (net worth and income) and SATs, class rank in college, and grade performance in college," said study author Thomas Stanley.

Once school's out for (every) summer, if the report card means so little, what does? If 12+ years of fact cramming only matters for crossword puzzles and trivia night, what aren't we teaching our youth? 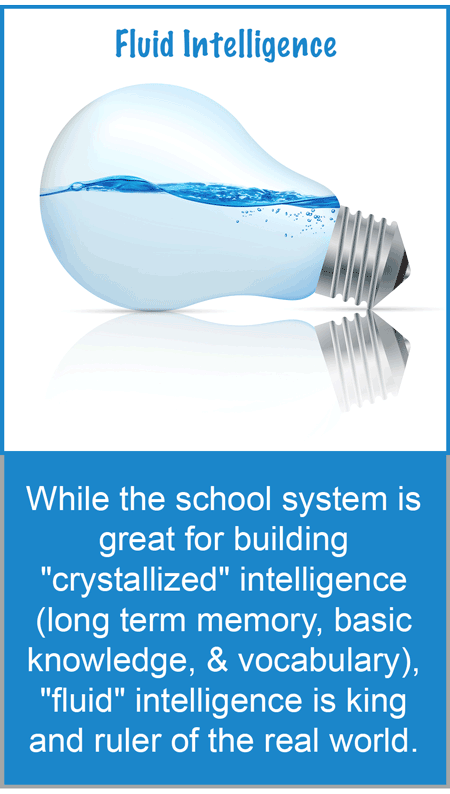 While the school system is great for building "crystallized" intelligence (long term memory, basic knowledge, & vocabulary), "fluid" intelligence is king and ruler of the real world. A nicely illustrative quote:

To thrive and prosper in an ever-changing world, we need to "be water" in every situation and every environment. Fluid intelligence measures our ability to adapt to change, our ability to be resourceful, our ability to see patterns and relationships, and our ability to creatively solve new and novel problems.

Before we tell you how meditation cranks up this awesome ability, it's important to first understand how and why people with "MacGyver-like" fluid intelligence graduate as valedictorians of the real world. 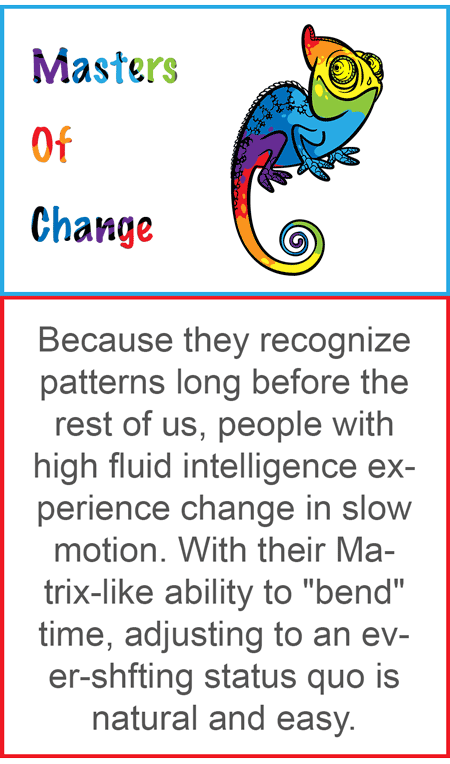 Cognitive Flexibility — While the "4.0-GPA-type" is more likely to be cognitively "rigid," or to the extreme, a "know it all" (a common pitfall of high crystallized intelligence), people with high fluid intelligence are cognitively flexible. As the great Socrates once philosophized, "I know one thing... that I know nothing." In our ever-changing world, we must stay open to new ideas, potentials, and possibilities.

Recognize Change Early — Because they recognize patterns long before the rest of us, people with high fluid intelligence experience change in slow motion. With their "Matrix-like" ability to "bend" time, adjusting to an ever-shifting status-quo is natural and easy.

Light on Their Feet — Because people with high fluid intelligence see change as vital and necessary, they don't get set in their ways. In a world where "data is the new oil," making adjustments and "pivoting" in the face of fresh information is essential to staying relevant. Life's true valedictorians understand this, and stay light on their feet as a result. 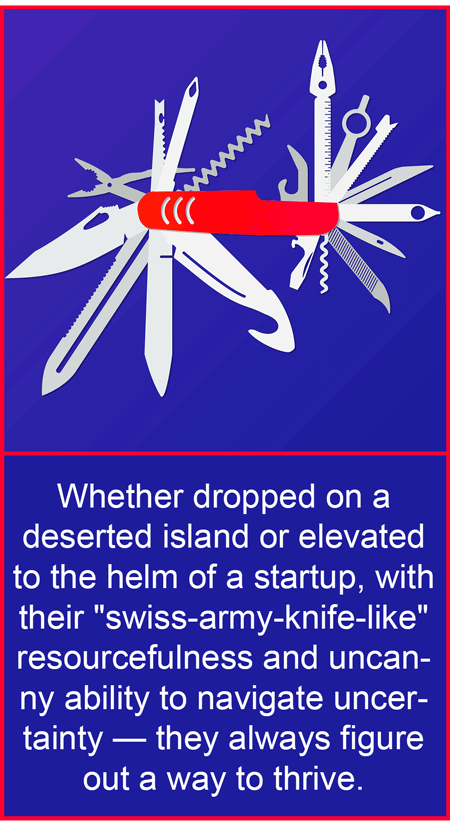 Masters of Uncertainty — We live in an uncertain world. With night vision goggles, people with high fluid intelligence have the well-tuned intuition and magnetic gut-feel to find their way through the dark. Whether dropped on a deserted island or elevated to the helm of a startup, with their "swiss-army-knife-like" resourcefulness and uncanny ability to navigate uncertainty — they always figure out a way to thrive.

Always Have Backup Plans — While the rigid "crystallized thinker" is more likely to get stuck on one solution, people with high fluid intelligence always have a plan A, B, C, D, and all the way to Z if needed. Because they envision infinite roads to success, when faced with a seemingly immovable object, they always find their way around it, under it, over it, or taking a different road if required. Their motto is "I'll find a way... I always do."

Growth Mindset — With their curious nature and naturally ingrained "growth mindset," people with high fluid intelligence aren't afraid to go out of their comfort zone. Why? Because that's how you grow. That's how you expand your limits. In the dojo that is life, there is always some ability to hone and some skill to master. 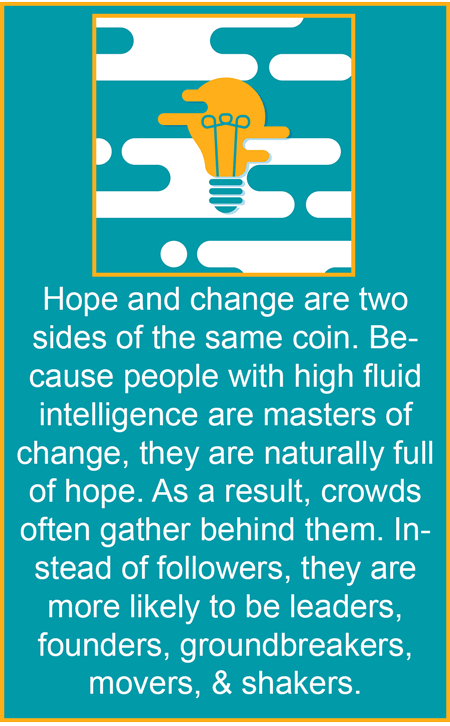 Aren't Afraid To Fail — To become a black belt at anything, you must first be a "mistake-making" white belt. In this way, failure is never permanent. It's data. It's useful. It gets you one step further to figuring out what works, one step closer to achieving that black belt. Fail hard. Fail fast. Fail often. It only makes you better. Fluid intelligence opens our eyes to this paradox.

They Fall Forward — While people with high fluid intelligence are not immune to getting knocked down (no one is), they do have the resilience, adaptability, and flexibility to never be down for the count. When they fall, it's always forward.

Are Leaders, Not Followers — Hope and change are two sides of the same coin. Because people with high fluid intelligence are masters of change, they are naturally full of hope. As a result, crowds often gather behind them. Instead of followers, they are more likely to be leaders, founders, groundbreakers, movers, and shakers. 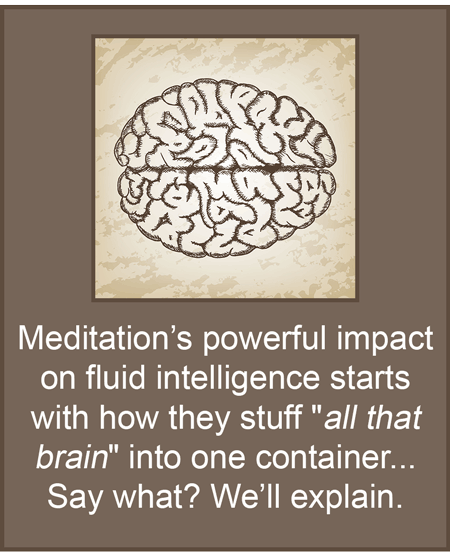 Understanding the "meditation → fluid intelligence" link starts with how they stuff "all that brain" into one container... Say what? We'll explain.

One might question, since meditators "grow" a number of different brain regions through neuroplasticity (like the insula, hippocampus, prefrontal cortex, etc), wouldn't they eventually need really big craniums to house all that powerful gray matter? Of course not, that's ridiculous! Building a big beautiful brain has nothing to do with becoming a human bobble head doll.

Meditation increases brain size/surface area by making its outward features (known as "gyri") more grooved, wrinkled, ridged, and folded. This process of "gyrification" is a bit like stuffing your whole wardrobe into one tiny suitcase. Don't worry, it's a very good thing. We actually want our brain to look like a super-complex maze.

Why? The more intricate and detailed we make its outward features (through neuroplasticity), the further we get from "smooth-brained" lower animals. In this way, harnessing the power of meditation to "pack-in" loads of gray matter not only "spring-loads" our brain power, but also slingshots our place on the evolutionary timeline. Darwin would approve.

Back to fluid intelligence. Where does "fluidly-intelligent" activity occur in the brain? In the thin, outermost surface layers (of the cerebral cortex, especially). On the edges. Then, like a compressed spring, a brain with compact outward features would catapult this "MacGyver-like" ability, right? Yes!

For meditators, with their grooved, wrinkled, and ridged brain features all "packed in nice and tight" (of the cerebral cortex, especially) — their brains are naturally wired for high fluid intelligence. "All that brain" stuffed into one cranium. That's the magic.

Want more? Meditation also strengthens two "hot bed" fluid brain regions, the "dorsolateral prefrontal cortex" and the "anterior cingulate cortex." The ancient mind practice also makes us "gritty" and mentally tough, boosts emotional intelligence, balances our brain, powers-up creativity, and magnifies intuition — all linked to fluid intelligence. We could go on, but you get the picture.

So, you didn't graduate at the top of your class? No problem. Fill up your fluid intelligence and become the valedictorian of life. Stand atop the podium with meditation. 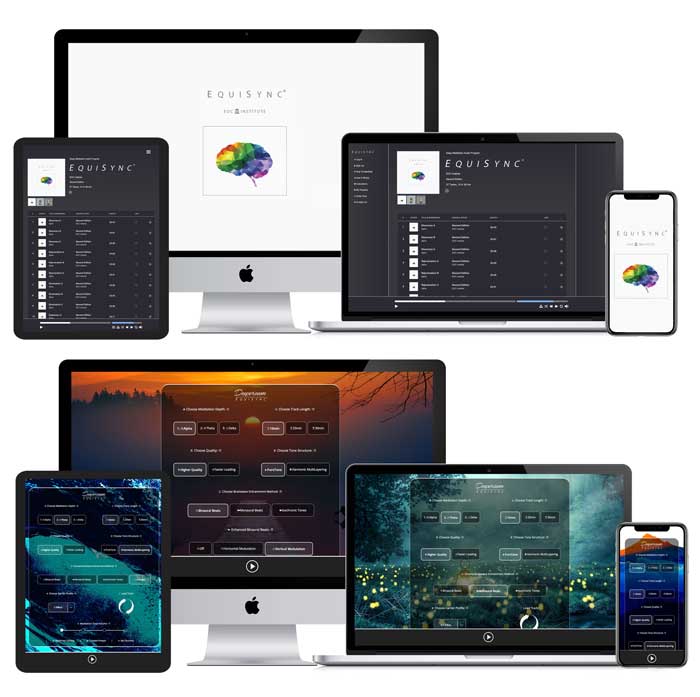 EquiSync® Classic
✓New User? Start Here
✓Highly Optimized
✓Highly Popular
✓Plug & Play
✓Simple & Elegant
✓ Show More
Over a decade ago, we released our highly popular brainwave system, EquiSync Classic. Since then, we have upgraded the program continually, ensuring our deep meditation audio technology stays on the cutting edge. The latest version of the program includes seven-plus hours of highly optimized downloadable MP3 audio tracks (that you own forever). While Deepereum may be the more robust system of the two, many people, especially those new to the technology, prefer the elegant simplicity of EquiSync Classic. Sign Up
EquiSync® Deepereum
✓Advanced User? Start Here
✓Highly Configurable
✓Make Your Own Tracks
✓Thousands of Combinations
✓Incredible Potential
✓ Show More
EquiSync Deepereum is the first program on the market that allows you to precisely build, customize, & curate a meditation audio track to your liking. With the program's powerful configuration options (brainwave frequency, entrainment technique, session length, audio quality, soundscape, & more), Deepereum opens the door to thousands upon thousands of potential track combinations. While intermediate to advanced users really love the program, Deepereum is built for everyone. Sign Up
EquiSync® Classic:
Free Demo
EquiSync® Deepereum:
Free Demo
EquiSync® Classic:
Sign Up
Login
EquiSync® Deepereum:
Sign Up
Login
How To Meditate