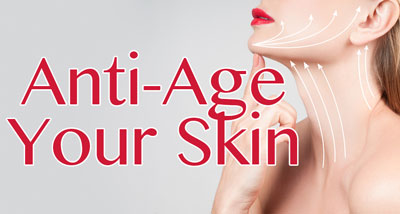 With so many anti-aging skin care products on the market, it's often a surprise to learn the best solution does not come in a bottle or tube.

Here, we dive into some amazing studies showing meditation's incredible age-defying ability to rejuvenate and restore our skin to pristine perfection.

With such overwhelming evidence, it is easy to see why meditators very often look decades younger. 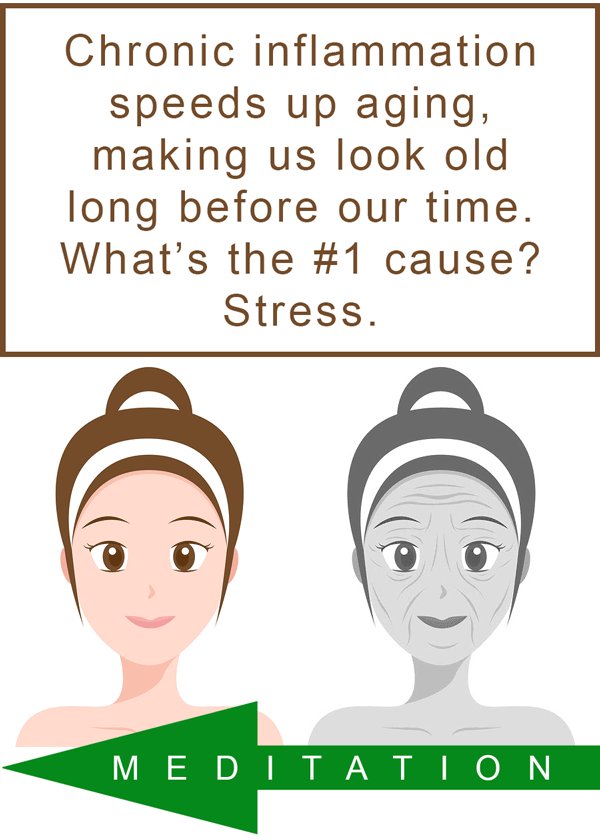 If a true kryptonite existed for young, healthy looking skin, inflammation would be it.

Of course, a little bit is both natural and necessary. Chronic inflammation, however, can make us age faster than an undercover mafia detective.

For those of us who want to age gracefully, when chronic inflammation lingers in our body’s biggest organ, our skin, it can make our outermost layer look like Babe Ruth's baseball mitt. Wrinkles, sagging, loss of skin tone, pigmentation changes, the whole works.

What’s the biggest cause? While chronic inflammation can be traced to processed sugar, lack of sleep, poor diet, environmental toxins, secondhand smoke, UV light (sun) — stress is the human body’s most wanted arsonist because it's so potent and affects us 24/7/365.

So, meditation's magic ability to, like fairy dust, restore our aging skin to pristine perfection is because the ancient practice makes us highly resilient to stress. Is this correct?

While we could go on and on about how meditation transforms us into a black belt master of stress (by lowering cortisol, changing the brain’s fear response, transforming the mind, etc), we will save that for later. For now, let's take it up a level.

The "Inflammatory" NF-κB Gene: Turn Off The Genetic Aging Of Skin 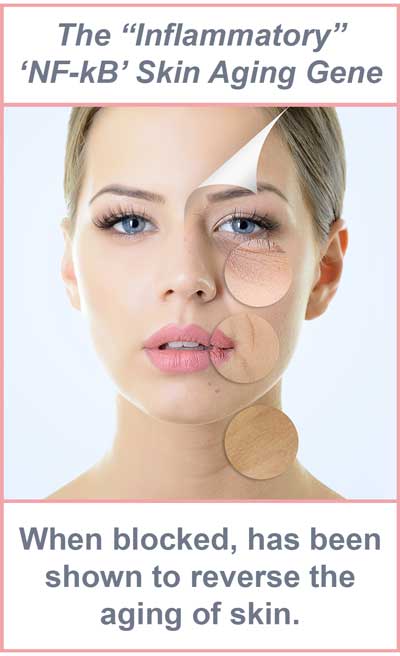 In a groundbreaking study that earned him the 2009 Vilcek Prize for Creative Promise in Biomedical Science, dermatologist Dr. Howard Chang and colleagues at Stanford University have reversed the aging of skin in mice, making it look and act just like new skin.

Here's how. First, they discovered one critical protein (NF-κB) that regulated the aging process of skin. By applying a "specially concocted solution" to the mice’s skin, the researchers then turned off the NF-κB protein. What happened next was spectacular.

In addition to their skin becoming much thicker (skin thins as we age) and much more firm (like ironing out wrinkles), their skin genes also underwent massive upgrades, with far less cellular aging and little to no inflammation.

Dr. Chang told Wired Magazine, "When you block NF-κB when the organism is quite old," Chang said, "you can basically block the genetic program, 'aging'." 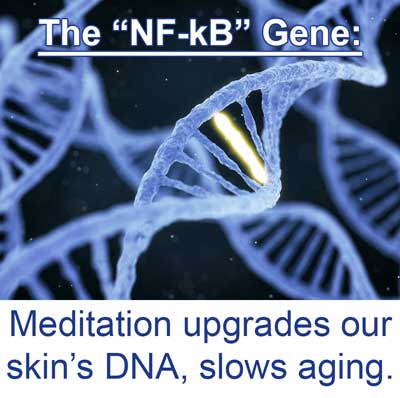 Armed with this landmark scientific discovery, Dr. Chang began work on a "NF-κB inhibiting" skin care cream, because "that’s what people want," as he told The New Yorker magazine. Indeed, we all want to swim in the fountain of youth.

However, his efforts threatened the massive $135 billion global skincare market incumbents, and he ultimately gave up on his quest.

He told The New Yorker magazine, "It’s the most difficult field I’ve ever worked in, and I didn’t want to define my scientific life with all these fights."

Luckily, meditation picked up where this brilliant Stanford doctor left off.

How Meditation Deactivates NF-κB, Stops Our Skin From Aging 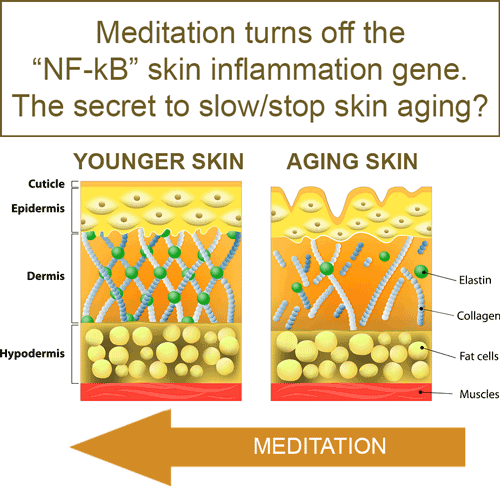 In 2013, researchers from UCLA (Black et al) had 45 family dementia caregivers practice meditation for 8 weeks, with unexpected yet amazing skin rejuvenating results. What did they uncover?

Among the 68 genes impacted by meditation was the very same super protein that Dr. Chang found to reverse the aging of mice skin, NF-κB. But this time, it worked in humans.

Because meditation turns this key age accelerating gene off, should researchers end their search for the "impossible" NF-κB-inhibiting skin care cream that, millions of dollars in R&D has, up until now, failed to create?

Even better, can meditation make our skin age backward like the cult classic movie, "The Curious Case of Benjamin Button," where the decrepit old man slowly transforms to a young and handsome Brad Pitt?

While that may be stretching it a bit, what we do know is that people who practice meditation very often look decades younger. (A few age defying celebrity meditators: Tom Brady, Gisele Bündchen, Will Smith, Hugh Jackman, Nicole Kidman, Gwyneth Paltrow, Sting, we could go on).

Why The Stress Hormone 'Cortisol' Leads To Wrinkles & Sagging Skin 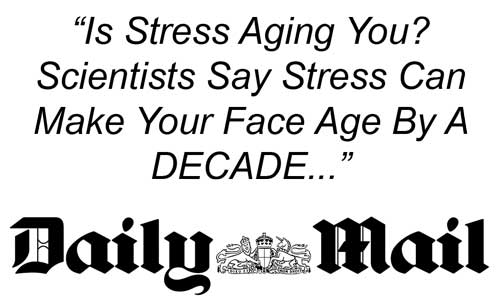 Because we are all under pressure all the time, most of us don't even know that we are 24/7 stressed out basket cases. It's par for the course.

Non-stop stress mode shifts our brain’s fear center amygdala into overdrive, which then signals our adrenal glands to pump out ruthless stress hormones like cortisol.

As the grandaddy of all age accelerating biochemicals, too much cortisol in our system can suppress immunity, raise blood pressure, tank libido, contribute to obesity, and much more. Sweet.

And it sends our blood sugar levels to the moon. For those of us who want to look and feel young, this is a big deal.

When sugar binds to our proteins and lipids through a destructive process called "glycation," it makes our skin look like we spent the last thirty years baking under the hot Phoenix sun.

Glycation: Breaking The Will Of Our Skin's Collagen & Elastin 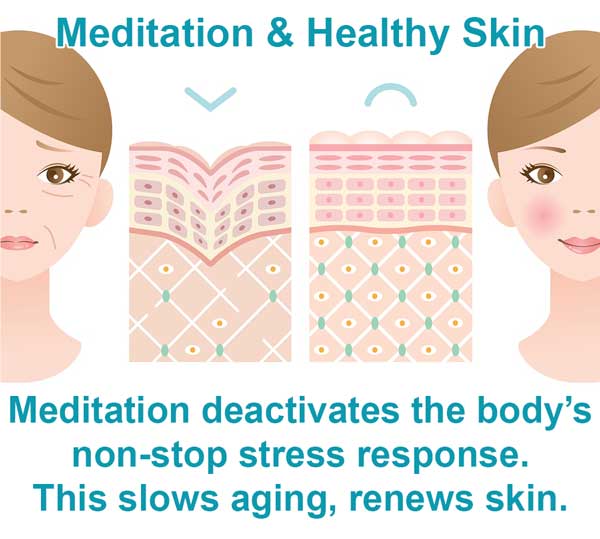 In the battle against wrinkly, sagging skin, we have two key lines of defense, collagen and elastin. You probably recognize the names from the bottle of lotion on your bathroom countertop.

Elastin is a highly elastic protein which keeps our skin stretchy and able to bounce back from, say, a poke or a pinch. Collagen’s job is to keep our skin thick (in the best way!), supple, and strong.

Once the stress hormone cortisol breaks the will of our elastin and collagen, our once beautiful, tight, and resilient epidermis taps out — and we begin our descent down sagging skin mountain, notching a new wrinkle every time we visit a news website. 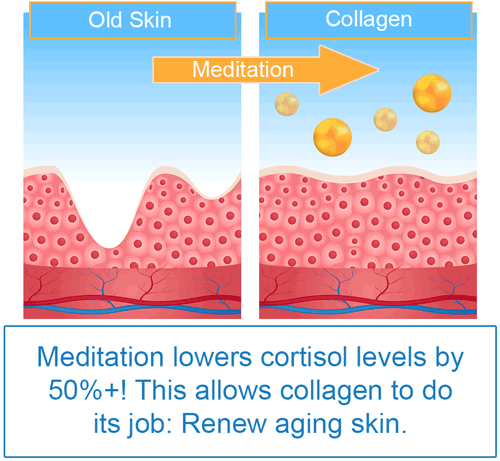 Cortisol: As the chemical precursor to wrinkles and sagging skin, too much cortisol can make our skin look like the wadded up shirt sitting at the bottom of the closet.

In a wide range of studies, including one at UC-Davis (2013) and Rutgers University, meditation has been shown to drop cortisol levels like a sack of potatoes (50%+!).

Having less cortisol in our system reverses the 24 hour stress chemical cycle (glycation) which, if left unchecked, would eventually make us look decade(s) older.

The result? Our skin stays high and tight, day and night.

Our Stress Loaded Lives Are Making Us Old 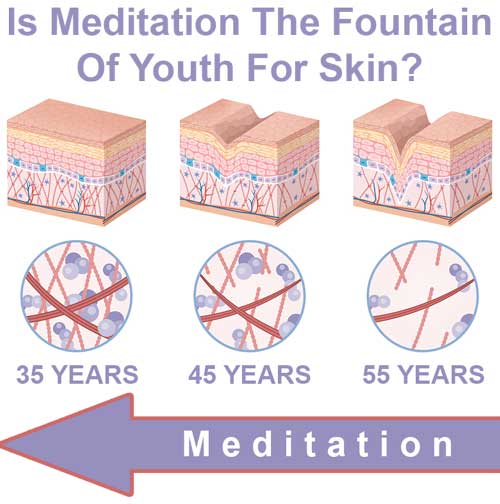 "I think that tiger wants to eat me! Better grab my spear or get ‘outta here."

With caveman on the nightly dinner menu, our primitive hunting and gathering ancestors spent their days both fighting and fleeing hungry lions, tigers, and bears.

In time, our neanderthal brethren's daily struggle to survive forced their biology to adapt — with their brain's fear center " amygdala" receiving massive upgrades across the board.

The problem is, while we no longer spend our days running away from hungry predators, we are still wired much like cavemen.

And it's making us look and feel old. Being locked in stress mode floods our bodies with a host of nasty age accelerating biochemicals, while wreaking havoc on our once mirror friendly appearance.

Amygdala: To kill a life-threatening poisonous snake, cut off the head (for illustration only, we love snakes!). To end the body’s age accelerating, out of control stress mode, cut off the amygdala.

That’s exactly what meditation does. In 2011, Harvard University (Lazar et al) studied the brains of mindful meditation practitioners as they practiced for 27 minutes per day. What did they uncover?

Among their list of amazing findings, the meditating brain’s fear center amygdala had somehow managed to shrink, while its electrical activity quieted down dramatically!

For those of us who want to age more gracefully than a ballerina, this finding means that meditation effectively remolds and reshapes our brain (through neuroplasticity) to sidestep the age accelerating biochemical cycle that so many stressed out folks get locked into.

Note: If you want to discover even more ways meditation makes us look and feel decades younger, then this article is highly recommended.