How Meditation Helps You Live Forever, Like a Lobster

Telomerase — How Meditation Can Make You Immortal

Why Lobsters Don't Age. At All. 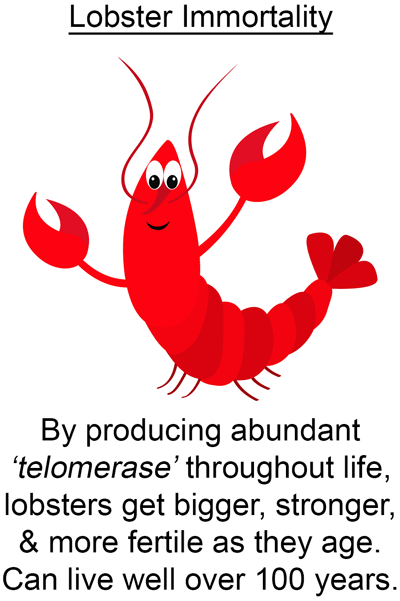 Lobsters are biologically immortal. What does this mean? They don’t die from old age like we do, it's only when they get eaten, get hurt, or catch a disease that they meet their maker.

In fact, assuming they don't end up on the dinner table, these ocean floor dwellers can live for more than a century! A fisherman out of Newfoundland, Canada recently caught a 20+ pound lobster estimated to be 140+ years old.

So why are lobsters "immune" to aging while the rest of the animal kingdom, including us, withers away, DNA into dust? Lobsters owe their super longevity to the enzyme ‘telomerase,’ which basically works like fertilizer for long, healthy telomeres.

While we, humans, gradually shut down this biomarker's production, lobsters crank out tons of this stuff all the time, with no dropoff in production. Ever.

As we become weaker and more brittle, these super crustaceans become bigger, stronger, and perhaps most amazing of all, more fertile with each year that goes by.

Instead of dying off as they age, lobsters' telomerase saturated cells have no fixed lifespan, forever refreshing, renewing, and rejuvenating themselves.

Telomerase: The Next Billion Dollar Business

With telomerase now under heavy research and investment, some Silicon Valley entreprenuers believe that in 20 years, old age will be like the landline phone is today. Obsolete. The next multi-billion dollar mega-business awaits.

If their venture succeeds, then heart attacks would be so last year. Seeing "natural causes" written on a newspaper obituary could possibly mean the recently deceased got hit by a bus.

However, unless you own two yachts and a mansion in Beverly Hills, this age erasing treatment will likely be out of reach. That's assuming a proven solution makes it to market anytime soon.

Luckily, we don't need to win the lottery to live much, much longer. Nor do we need to grow pincers, sprout a protective shell, and move to the bottom of the ocean. There is a way for us humans to boost our telomerase right now. How? Meditation.

How Meditation Makes Us 40% More Immortal 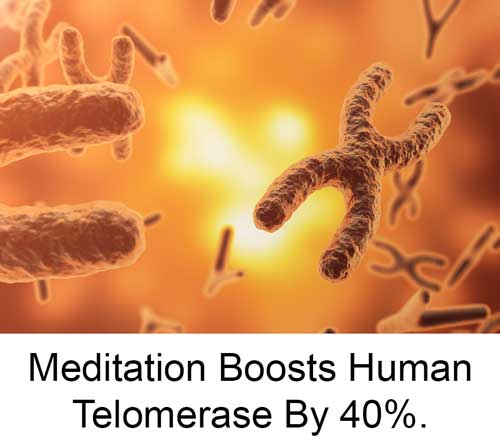 A 2011 study by doctors at the University of California-Davis (Jacobs et al) looked at the white blood cells of 30 people before and after a three month meditation retreat. What did they find?

The scientists discovered that the meditators cranked out about 40% more "telomerase units per 10,000 cells" versus the control group!

On the results, Clifford Saron Ph.D., a UC-Davis neuroscientist recently said, "We have found that meditation promotes positive psychological changes, and that meditators showing the greatest improvement on various psychological measures had the highest levels of telomerase."

Can meditation's 40% telomerase boost make us 'biologically immortal’ like our ocean floor crawling lobster gods of longevity? Where we look 35 at 100, and are more likely to die from skydiving than from old age?

While more data is needed, meditation’s proven anti-aging properties are incredibly promising, with life extension and longevity researchers chomping at the bit for more meditating brains and bodies to study.

It appears that for meditators, the future is long and bright.